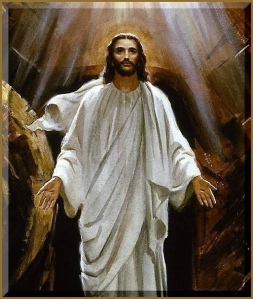 The Church’s teaching authority, vested in the bishops, as successors of the Apostles, under the Roman Pontiff, as successor of St. Peter” (Magisterium). To start let us look at the Catechism of the Catholic Church, “The mode of Christ’s presence under the Eucharistic species is unique…. In the most blessed sacrament of the Eucharist ‘the body and blood, together with the soul and divinity, of our Lord Jesus Christ and, therefore, the whole Christ is truly, really, and substantially contained.’ This presence is called ‘real’ – by which is not intended to exclude the other types of presence as if they could not be ‘real’ too, but because it is the presence in the fullest sense: that is to say, it is a substantial presence by which Christ, God and man, makes himself wholly and entirely present. (CCC 1374)

When does this start? “The Eucharist presence of Christ begins at the moment of the consecration and endures as long as the Eucharist species subsist” (CCC 1377). Therefore, the Magisterium undoubtedly states that Jesus is truly present in Holy Communion.

The last point I will make is not part of the Church’s way of finding out the truth, though it can and sometimes will use its results. Of the Eucharist miracles that have been scientifically studied, I will use a less known example. Lanciano is a town in Italy. At about 700 A.D. a priest was saying mass, but he had doubts about the real presence in the Eucharist. During the words of consecration, the bread and wine changed into living flesh and five different size drops of blood. Later,

“In 1970-’71 and taken up again partly in 1981 there took place a scientific investigation by the most illustrious scientist Prof. Odoardo Linoli, eminent Professor in Anatomy and Pathological Histology and in Chemistry and Clinical Microscopy. He was assisted by Prof. Ruggero Bertelli of the University of Siena.

The analyses were conducted with absolute and unquestionable scientific precision and they were documented with a series of microscopic photographs.These analyses sustained the following conclusions:

They even weighed the drops of blood individually, and together, with the same weight! This, though, is just one of the many miracles that seem to prove that Jesus is present, and are baffling scientifically speaking.

I know this was a lot: you might need to read it again to let it sink in.  Be sure to leave a comment if you have anything to share. God bless.