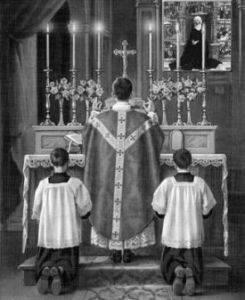 A Quick Note- We hope that you, our amazing viewers, have had an amazing summer! We would like to apologize for the lack of posts in the past few days. Work has caught up to us, especially with school starting soon. We hope that the next few posts will make up for it. 🙂

I think it’s not unreasonable to say that many Catholics today, through no fault of their own, don’t really know what the Mass is. The majority of Catholic youth now aren’t formed using the simple, direct memorization format of the question-and-answer Baltimore Catechism, and most of what Catholic kids do learn is often given to them through Sunday school courses that (in my experience, at least) teach some basic elements of the Faith, but don’t clearly pinpoint certain doctrines and fully explain them. Principle among these “not fully explained” doctrines has been, unfortunately, the question of what the Mass is.

I, personally, was homeschooled and grew up with the Baltimore Catechism (the teaching tool of most American Catholics prior to the late 1960s). I’m genuinely grateful, to God and to my mother who taught me, because from early on I’ve known the answer to the question of what the Mass is pretty well. I’m thankful for that not to be an arrogant know-it-all, but simply because it strengthened my faith in those years. But I also had to go through parish CCD and other forms of religious education later, and this was my experience of them:

And this last point is incredibly unfortunate, because although it’s necessary to know that the consecrated bread and wine are Our Lord’s Body and Blood, it is equally important and necessary that Catholics be taught about the nature of the Mass. The Mass is the source and summit of the Faith, according to the Second Vatican Council, so its imperative that we know as much as we can about it. What is the Mass? What happens during it? If you, my good reader, are unable to answer those questions, then I hope I can be of service to you in answering them as we go along.

I think the three most prevalent misconceptions about the Mass today are these:

If those are misconceptions or incomplete notions of the Mass, then let’s ask the question, one last time, whose answer will clarify it all: what is the Mass, if itisn’t just “the way Catholics worship God,” or a re-enactment of the Last Supper, or a sacrifice in some vague sense?

Here is the definition of the Mass, which I’m going to explain further after you’ve read it, to make sure any misconceptions are clarified: the Mass is Christ’s offering of His Body and Blood to the Father, just as He did on the Cross, but this time in a “non-bloody” way, which means that, unlike the Cross, Christ offers Himself in each Mass without dying.

We can clarify this definition further here in a minute, but given this definition, the Church has always considered that the Cross and the Mass are really the same thing: on the Cross, Christ sacrificed Himself and died; in the Mass, Christ still offers Himself in sacrifice to God, but does not die, since He has died already and cannot die a second time. But it’s the same sacrifice, for the priest is the same, and the victim of the sacrifice is the same, Jesus Christ, offering Himself in eternity now as He did on the Cross in time.

Clarification 1: the Mass is not the “repetition” of the Cross, as though Our Lord’s death on the Cross wasn’t good enough, and He needs to be offered over and over again. That’s the objection Protestants use against the Mass, and it’s quite simply untrue. Christ is not re-offered in the Mass. Rather, as the Scriptures tell us, He is still offered (Revelation 5:6, for example, says that Christ, the Lamb of God, is in Heaven “standing as though slain”—because He offers Himself in sacrifice even after having died; and Hebrews 7:24-25 say that Christ has a “permanent priesthood, always interceding for us”). Indeed, He died only once, and this single act of dying brought about the Redemption; but He didn’t offer Himself in death and then be done. Instead, even after having risen from the dead and ascended into Heaven, He still offers Himself, immortal and glorified, as the perfect Sacrifice to God the Father. His offering is continual and unceasing, and the Mass “brings it down” from Heaven and makes it present on the altars of our parishes. It’s equally correct to say that the Mass takes the Crucifixion of Our Lord from 33 A.D. and brings it to the altar in our present place and time. Whether we want to think of it as “tapping into” and making present the death of Christ on Calvary, or tapping into and making present the self-offering of the Risen Christ in Heaven, both are correct: it’s all one, continuous, unending Sacrifice, which is offered in the Mass under the appearances of bread and wine, through the instrument of the ordained priest (and, by extension, us the laity; more on that below).

Clarification 2: the Lord offered Himself by Himself on the Cross; in the Mass, He uses the ordained priest, who acts in the Person of Christ and functions as His instrument. It is still Christ who offers Himself in the Sacrifice of the Eucharist, but He does it through the priest. The priest, Father Whoever, acts as Christ’s instrument (rather like a person using a piano to make music: the musician [Christ] plays the music [the offering of the sacrifice], but the piano [the ordained priest] is what allows the music to be played).

Because of all this, we can see that the Mass is really Christ’s action more than it is ours. It can be so tempting to think of the Mass as what we do to or for God; but really, the Mass is what God, the Second Person of the Trinity incarnate, does for us, and anything we do within the context of the Mass is merely a participation in the priesthood of Jesus Christ.

But at the same time, it would be incorrect to assume we do nothing. There is a reason that Malachi 1:11 prophesies that “From the rising of the sun to its going down, in every place, a pure offering will be made to [God’s] name.” For the Sacrifice of the Eucharist is, in addition to being the action of Our Lord, the action of us, too. We, priest and laity alike, are all “priests” in our own way. The ordained priest is the one who can be the direct instrument of Our Lord in the offering of Him, the one who can act in His place and actually do the offering, as it were. He alone has been given authority by God (through his ordination) to stand at the altar and “make it happen.” But we the laity have a priesthood about us as well, and we are able—and required—to offer the Lord to the Father ourselves, doing so, as the concluding doxology of the Canon says, “Through Him, and with Him, and in Him.” In every offering of the Holy Sacrifice of the Mass, Christ the Lord is the “true” priest, the ordained priest is the instrument priest through which Christ directly offers Himself, and we the laity are all priests, too, called upon to offer the Sacrifice of the Eucharist—the Sacrifice of the Body and Blood of Christ—together with the ordained priest and, in the end, with Jesus Himself.

This has been a great deal of information, and a great deal more could be said still, but I hope it was informative, if you didn’t know these things before. If you did know these things before, I hope this has clarified the nature of the Mass further. As a parting gift, I’d like to leave you with this image. Especially if you had not known clearly about the nature of the Mass before reading this, this picture makes more sense now, doesn’t it?

May God bless you, until the next time.