Last year, a few days into my sophomore English class, my teacher showed us a documentary as a way to introduce our first book of the year. Honestly, I don’t remember a single thing from the movie. I was too distracted by the discussion happening in the closed chat room which our teacher set up so that my class could discuss the movie without having to speak aloud. The discussion centered around a single question: Is humanity inherently good or evil?

The verdict was that humanity
is inherently evil.

Here, you must know that this was a public school, and that I only knew of two other Catholics in my class. One of the them was a friend of mine, who, days later, tried her very best to convince me to not debate the origin of the Celtic Cross with her pagan friend. (She wasn’t successful) So obviously, as the discussion took this turn, I was feeling outnumbered and essentially friendless. I knew that humanity is and always has been inherently good, and I even knew how to prove it but not to a group of thirty high-schoolers who were predominately Mormon or atheist.

In short, it wasn’t because I lacked the knowledge or the ability to defend humanity. It was because I was scared,scared to go against the generally accepted “truth” and scared to be Catholic.

The purpose of this story is not to scare or discourage you. Rather, it is the prologue to a story of hope, and our hope is in the strength of Catholicism. We should never, ever be afraid to be Catholic, and here are five reasons why:

Catholicism is the only religion which can claim to be founded by God Himself, in case anyone was wondering. We were established by Jesus Christ, and through Him, we have withstood the tests of time and the attacks of hell. Why?
Because the truth is on our side.

hurch never failed them. Two thousand years of history and its physical evidence tell us that we are built on something solid. That which is not true cannot last and even if it does, it doesn’t remain the same. But the Catholic Church has lasted and hasn’t changed. We still profess the same faith that the earliest disciples professed.

So don’t be afraid to be Catholic, because you have an army of saints behind you and two millenniums of historical evidence to support you.

That’s nice, you’re thinking. It’s nice that these things that happened two thousand years ago can support me. But what about right now, when history might not matter to the people who explicitly or implicitly challenge my faith?

I guarantee that you will never find a Catholic belief that goes against reason and physical evidence. If you do, we call it a miracle. And miracles still happen, so nobody can say we’re just using it as an excuse for what we cannot prove. Rather, we’re using the word to describe something we cannot explain but we know to be true.

What this means for us is that, as long as we have done our research properly, we never have to be afraid of being caught in a contradiction. If something is logical, it will be able to stand on its own. We don’t need to try to explain anything away and make excuses for it.

So don’t be afraid to be Catholic, because we stand with reason, which will never falter. “The truth is like a lion; you don’t have to defend it,” says St. Augustine. “Let it loose; it will defend itself.”

Allow me to reference the story which I related above. In that situation, I already knew #1 and 2. I already knew I had no reason to fear. What I was more scared of was that I would be put down for standing for my faith in the first place. Society continually tells us that we can do whatever we want and no one can judge us for it; which should mean that I can believe whatever I want and no one can judge me. If this is what society (mistakenly) takes for the truth, then why are we supposed to suppress expressions of our religion? We are constantly discouraged and silenced about what we believe in.

What society doesn’t seem to understand is that convictions form humanity. If we all suppressed our beliefs and opinions, if we all thought that everyone was right in their own world, we would never progress. Progress is made because we are pursuing the truth and eliminating what is false. But if no one is to believe that they hold the absolute truth, we end up in a stalemate.

The truth is that humanity needs people who hold convictions about the truth, and that while we should respect every opinion, there is going to be a right and wrong answer. We should not be afraid to defend the answer that we stand by.

So don’t be afraid to be Catholic, because the world needs people who stand by the truth since it is afraid to do so.

4) Persecution= brownie points.
You may not be a debater. You might not actively seek out lively discussions like I do. That’s okay. But know that it’s not just the debater 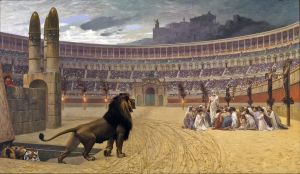 s who are offended and insulted. Just by witnessing to your faith through your life, you open yourself to the attacks of a culture of hate.

This simple fact is a turn off for a lot of people. It was the reason my friend didn’t want me to debate with her friend; she just didn’t want to be involved. She was afraid that our differences would cause trouble and that she would suffer the consequences.

Don’t let this scare you. Jesus Himself has said that we who are persecuted for His sake will inherit the kingdom of heaven. That promise seems kind of irrelevant and distant when the hate that the world offers is so much closer to us, but the promise still stands.

So don’t be afraid to be Catholic, because if you are persecuted, it’s just because the world can’t handle the truth and love you have to offer. And besides, persecution= major brownie points when it comes to getting into heaven.

If the above four things fail to convince you, consider this: not only do we have reasons to not be afraid, but we also have no reason to be afraid.

Let me explain. If we die and find out that the Catholic Church is wrong and there’s no such thing as heaven or hell and we just evolved by chance, (Which, let’s be reasonable. That will never happen.) we lose nothing. But if we deny our faith in order to fit in with society and we die and find that it was all true, we have lost Life itself.

So don’t be afraid to be Catholic, because either you’re right and you’re heading straight for heaven, or you’re wrong and it won’t matter. And since we know the second option is entirely impossible, it’s pretty clear what you should be doing: Be Catholic.