Why do we take days off of school, or work, and get on a bus, and drive hundreds (or thousands) of miles to march? Why do we hold up those signs and pray and march down the streets of our nation’s capital?

“Life, liberty and the pursuit of happiness”- this is straight from the words of Thomas Jefferson in the Declaration of Independence. These are probably the most famous words from this influential document, and one of them has been under attack in a major way since January 22, 1973. Life. Life in its most innocent, vulnerable stage: unborn life. This is why we march. A baby in the womb has no voice and no defense, and yet can have his or her life taken away under the protection of law. Sometimes, the poor mother has no support and no love around her. She may feel like she has no choice, while the clinic claims to be “pro-choice.” 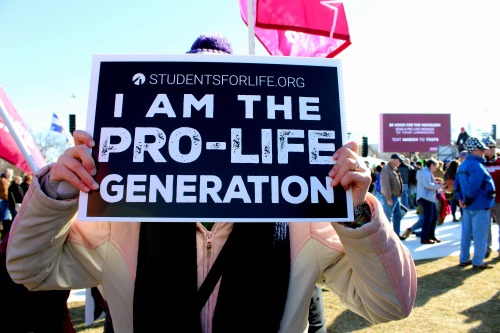 I went on the National March for Life this year for the first time, not knowing what to expect. I was blown away. The number of people united in the defense of life was staggering. The diversity of backgrounds and faiths was equally astounding. Along each stop of our 24-hour bus ride, there were other groups heading to the march, just as enthusiastic and energized as we were. It was like going on some kind of mission with other life warriors, and we felt a part of something bigger than ourselves. Being in Washington, at every church and on practically every corner, there were other buses. This is why we march. A fellow marcher in my group, Darin, explained it to me. He said:

“When they [the representatives] see masses of the people that they’re representing, in the streets, standing up for something, I think that’s kind of inspiring.”

The sheer number of people there on the day of the march was inspiring in itself. When one makes it to the end of the march at the top of Capitol Hill and turns around, the sea of people behind them shows not only how many people are there, but also how big the pro-life movement actually is. Think about it: that sea of people is a tiny fraction of those who support protection of life. There were millions who weren’t there physically but were praying and having their own rallies back home. To add to the significance, Congress was in session while we were in Washington. This meant that many of the pro-life politicians made it out to the March to represent and also hear our president speak.

The theme for the March for Life this year was “Love saves lives.” I pondered this statement, and tried to dig deep as to what it actually means. Legislation and political action can only go to a certain extent, but real, authentic love can do so much more. Love shines through in many forms:  love might be offering support to a young girl who is pregnant and thinks her only option is abortion, love might be donating money or baby supplies to your local Right to Life organization, or love might be visiting a nursing home and bringing a smile to the face of someone who rarely gets visitors. This is why we march. We march to save lives through love. 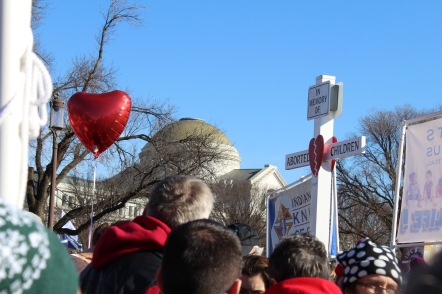 I think the most moving part of the March for me was the number of young people assembled for this important cause. If you feel like you’re the only pro-life kid in your school, or the only one who cares, know that you are not alone! Our generation is on fire for this movement; I saw it in everyone involved.

I interviewed another student in my group, Aliece, about the young people of the march. She stated:

“I think especially having young people there will help, because if the politicians see that the future of American and our entire political system thinks that abortion should be illegal, they would take a hint.”

St. John Paul II always talked about the culture we live in being a “culture of death.” However, he also had confidence in the Church’s youth and the fire in their hearts. God gave us a lot of energy and enthusiasm for a reason. We have the power to overturn a law some have called irreversible. We have the momentum to transform the hearts of so many. We have the power to save lives through love.